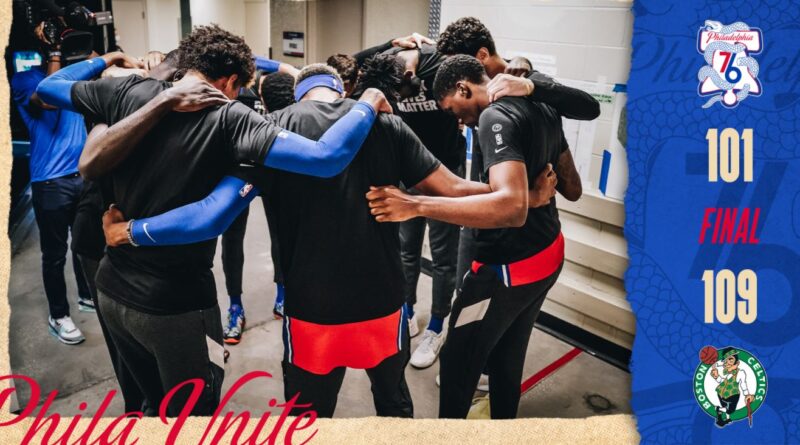 It is a story as old as time: the 76ers storm back in the third quarter only to blow the lead in heartbreaking fashion in the final moments. This was the story Monday night against the Boston Celtics as the Sixers were in the lead at the start of the fourth quarter following a 13-0 run to end the third (with Joel Embiid on the bench).

Embiid to the rim 🔨

Despite the Sixers playing a somewhat balanced attack as five players finished with double-digit points, their attack was no match for the Celtics and the performance of Jayson Tatum (32 points, 13 rebounds) and Jaylen Brown (29 points, six rebounds, three steals).

Philly was repeatedly torched by Boston floaters, threes, and timely drives late in the fourth quarter with the game on the line. Not to mention the Sixers finished with 18 turnovers, an obvious stat the players themselves picked up on. Embiid commented on the turnovers postgame and said, “It’s easy to fix. I feel like sometimes we try to do too much. We got to let the game come to us and move the ball.”

Furthermore, the team made frequent mistakes on switches that left some Celtics wide open while too many Sixers converged on the basket, like on this play where Tobias Harris and Embiid ran into each-other which allowed an easy Tatum bucket:

Jay Smooth to the hoop pic.twitter.com/HDLJAdc7k1

Per usual, the 76ers’ defense made history, and not in a good way. According to ESPN Stats & Info, Jayson Tatum’s 21 first half points were the most by a Celtics player in a playoff half since 2017. Tatum also became the youngest Celtic with 30 points and 10 rebounds in a playoff game. Finally, Tatum and Brown became the first pair of Celtics teammates both 23 or younger with 25 points in the same playoff game.

Tatum goes to work early in the 3rd!#NBAPlayoffs on ESPN pic.twitter.com/yyCY8vEofz

While Embiid had 26 points, 16 rebounds, and two steals he also finished with five turnovers, attempted just 15 shots, and looked exhausted in the waning moments. His fatigue was evident on the stat sheet too if you break it down by quarter:

Embiid’s exhaustion was especially concerning given Brett Brown decided to rest him until the 5:53 mark in the final quarter. The big man’s lack of shots in general was surprising considering he made his first five attempts straight and looked like he had the potential to take the game over. In fact, he started off the first quarter with 11 quick points, including a nice step-back three.

But as the game wore on, the Celtics used frequent double teams to force turnovers while the Sixers struggled to get the ball back in the post. The result was just one post touch for Embiid the entire fourth quarter. Moreover, Embiid looked flat-out lazy on an alarming number screens. Many were so ineffective that they just created more traffic for driving Sixers.

Embiid wasn’t the only slacker on Monday night. Al Horford had just 6 points and finished with a game low -18 in his first playoff game against his former team. While Josh Richardson and Tobias Harris finished with decent stats (combined for 33 points plus 14 rebounds), the 76ers could have used a 20 piece out of at least one of them, and if their shooting efficiency overall was even slightly better this game, Philly might have won.

Richardson was 7-of-17 from the field and 3-of-9 from three-point range. Harris shot about the same as went 6-of-15 from the field. The Sixers clearly struggled with shot creation and perimeter defense at times with Ben Simmons out, but the team also showed on their 13-0 run just how complete this roster can be.

👀 13-0 @sixers run to close the 3rd and take the lead on ESPN! #NBAPlayoffs #WholeNewGame pic.twitter.com/sM1uq5nUc5

With Embiid on the bench late in the third, Horford did some work on the blocks, defended multiple Celtics, set up baskets, and got a few tough points in the lane. Tobias created plays for his teammates and scored, Milton hit some deep shots, and Josh Richardson drove to the basket and played lock-down defense.

The Sixers might have more of a chance than many fans think in game two. They will have an incredibly motivated Joel and have actually won three of their last four regular-season matchups against the Celtics. Hopefully, Embiid emboldens his post-game comments and plays with a newfound fire after this loss, because the 76ers need a dominant performance out of their star to avoid falling behind 2-0 in the series.