After back-to-back losses for both teams, the 2-3 Eagles and 1-4 Giants currently sit at the bottom of the NFC East. While the Giant D has let up the most points in the NFC East (128), the G men should not be taken lightly and the Eagles will need to step up defensively themselves if they want to right the ship.

So far the Eagles have been outscored by their opponents 104-103, and committed eight penalties during last week’s loss to the Vikings.

Yes, the Giants are 1-4, their offensive line looks as shitty as ever, and their play calling has been woefully unimaginative with the exception of OBJ’s throwback-screen to Saquon Barkley last week. Despite all that (and speaking of Saquon), the Eagles will have their hands full with a talented team.

Despite the offensive line struggles, the Giants barely lost to the Panthers courtesy of a 63-yard game winning field goal and scored 31 points. Saquon Barkley’s combination of strength, speed, and athleticism has him looking like a top five NFL running back already in his rookie season. Barkley’s 582 yards from scrimmage ranks as 7th-best in the league and 5th-best amongst running backs.

Barkley isn’t the only bright spot on the Giants. Odell Beckham looks like his usual self, Sterling Shepard is becoming a more complete receiver every day and at this point would likely be a starting receiver on all 32 NFL teams, and the New York defense is not exactly devoid of talent either.

Defensive tackle Damon Harrison was an All-Pro selection in 2016 along with cornerback Janoris Jenkins and linebacker Alec Ogletree who are all still athletic freaks in the prime of their careers. Not to mention, safety Landon Collins is up there with Malcolm Jenkins in the debate for best safety in the league.

The Eagles obviously have elite talent on both sides of the ball as well, and for the record the ‘Birds have won seven of the last eight matchups against the Giants. So while the Eagles have lost back-to-back games for the first time since 2016, hopefully this weekend will be more of the same.

If the Eagles want their eighth win in the last nine outings against the Giants, they will have to continue their dominance on the ground while replacing Jay Ajayi, who will be undergoing surgery to repair his torn ACL on Thursday. The Eagles have out-rushed all of their opponents in 2018. Corey Clement will undoubtedly have to pick up some of the slack as Sproles and Smallwood are used more as receiving backs while Josh Adams might be too inexperienced to pick up Ajayi’s role as he only has seven carries on the season for 29 yards.

Clement was active last week but didn’t see the field—likely a precaution while he recovers from his quad injury—but will likely see an increased role on Thursday as he saw 16 carries the last time Ajayi was sidelined.

If the Eagles want to get back on track, they might look at putting left guard Stefen Wisniewski back in the starting lineup. Against the Vikings Wisniewski was benched for 2016 third-round pick Isaac Seumalo who struggled mightily throughout the contest. In particular, Seumalo allowed Vikings defensive tackle Linval Joseph to dominate their matchup most of the day.

For what its worth, Carson Wentz seems pretty optimistic about the 2-3 Eagles getting things back on track. In a Monday interview when asked about the offense’s early struggles in games he mentioned, “Frustrated, yes. Concerned, no”. Wentz went on to say, “We have veteran guys on this team that have been through it all and know how to win. I think we are going to get this thing going the right way”.

Hopefully Wentz is right because only seven previous Super Bowl champs have stared 2-3, and of the seven only one of them ended up making the playoffs by season’s end. 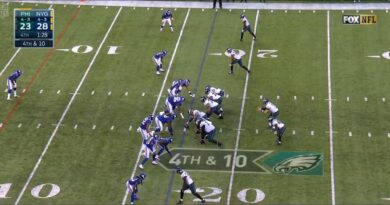 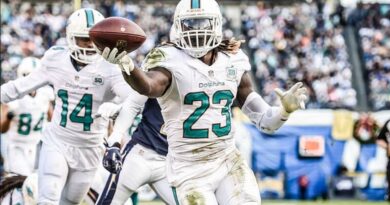