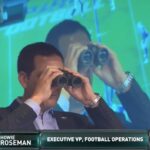 Per Rick Stroud from the Tampa Bay Times, the Buccaneers picked up quarterback Jameis Winston’s fifth-year option from his rookie deal. The deal will give Winston 20.9 million guaranteed, placing Winston as the 15th highest-paid QB in 2018.

Winston will earn slightly more than the 14th-highest paid QB in Aaron Rodgers (20.5 mill) and slightly less than the 16th (Cam Newton with 21.5 mill). QBs like Matt Ryan, Philip Rivers, Eli Manning, Big Ben, and Russell Wilson are within that range as well. With the exception of perhaps Manning and Rivers, Winston has yet to prove himself worthy of inserting himself in the conversation with QBs like Rodgers, Newton, Ryan, and Roethlisberger.

While Winston has yet to produce a season comparable to an Aaron Rodgers or Cam Newton peak year, he is not as far off from their production level as his detractors would have you think. In 2017, Winston posted a 92.2 QB rating despite inconsistent offensive line play, no threat at receiver aside from an injured Mike Evans, missing three games, and a running game that was beyond terrible.

Aside from this play where Winston looked like the most unathletic thrower to ever take a snap on this embarrassing strip sack and fumble that was returned for a touchdown against the Packers,

Jameis actually played decently during the Bucs 5-11 season. Even in this game against the Packers, he managed to throw for 270 yards and 2 TDs with no picks, but the Bucs’ defense choked the game away in overtime. Packers running back Aaron Jones ran in the game-winning 20-yard rushing TD on his lone carry of the game.

Winston was also pretty significant contributor the Bucs relatively lackadaisical 2017 rushing attack. Amongst Bucs runners who had at least 30 carries, who led the team in yards-per-carry? Fuckin Jameis Winston did bitch. Doug Martin led all Bucs rushers with 138 carries, 30 more carries than the next closest Bucs back. Martin averaged 2.9 YPC while Winston had 4.1. Winston threw for 3,504 yards while scoring 20 TDs and throwing 11 picks. The 20 TD total and yard total are both career lows for Winston, but the 11 interceptions were a career low and his QB rating was a career high.

Although, Winston’s critics would tell you the interception total and the high QB rating are a result of the Bucs padding their stats in garbage time. That argument has some validity considering the Bucs ended the season at 3-10 in the games Winston played in 2017. Personally I don’t put much stock in the concept (rarely, if ever will paid NFL defenders purposefully refuse to do their job during the regular season once they are on the field), but we’ll see this next season if that production was just garbage time stat-padding or a sign of true talent.

Bucs fans have some hope too with the potential within the offense. Winston is a former first overall pick and the Bucs have DeSean Jackson (granted an aging one at that), Mike Evans, Cameron Brate, and Alabama product O.J. Howard. Maybe one more offseason with a fully healthy group along with an improved defense and offensive line will right the ship for the Buccaneers in 2018.

The Troubling Case of Darrelle Revis