In the past few days, the Cleveland Browns have acquired Jarvis Landry, Tyrod Taylor, and Damarious Randall. They did it all by giving up DeShone Kizer and a couple of mid-round draft picks.

These moves add to a Browns roster that easily has more talent than any other Browns team in the past decade, and the moves make sense. Jarvis Landry is exactly the type of receiver the Browns needed to compliment a field-stretching talent like Josh Gordon. Landry can work outside or in the slot, and led the NFL in receptions last season with 112, and the Browns have never had a player with a 100+ catch season, per ESPN Stats & Info.

Landry’s route running savvy, toughness, and speed/agility combo is honestly the most impressive I’ve seen since Steve Smith was in his prime.

Not really sure what defensive coordinators are going to do when they have to line their corners up against two of the top 10 receivers in the NFL each week. Landry is undoubtedly now one of the most valuable players on the Browns roster, but his wide receiver counterpart—Josh Gordon—is maybe the best receiver in the league when healthy, and this is the first time in basically three years where Gordon is getting a full offseason of work in with his team without some kind of suspension hanging over his head and banning him from the facility.

In 2017, during his first football game in three years, Gordon became the only other player besides Odell to get at least 85 yards receiving against the Chargers the entire season.

On a side note but not really I have said it before and I will say it again: Josh Gordon has the wide-receiving intangibles of Calvin Johnson except he also has Tyreek Hill’s speed. If you ever have him on your fantasy team and you consider benching him, that is an insult to fantasy football, football in general, and your parent’s child-raising ability.

The only players who have had more receiving yards than Josh Gordon in their first two NFL seasons (since the 1970 merger) are Jerry Rice and Randy Moss. Randy moss didn’t have anyone great at QB, but he had Randall Cunningham towards the end of his resurgence and then Dante Culpepper for the start of his.

Jerry Rice had a hall of fame QB many consider to be the greatest of all time. Josh Gordon’s QBs his entire career have been Brian Hoyer and a bunch of other piles of garbage that aren’t worth mentioning. Gordon was also suspended for two games during his second season but then preceded to lead the league in receiving yards despite missed games.

For the first time in Gordon’s career the Browns have given him a quarterback who is at the very least remotely competent in Tyrod Taylor. In my opinion, Tyrod is not only remotely competent (as many fans believe), but he is actually one of the most underrated QBs in the league year after year and a top 15 QB when healthy.

In the 16 games the Bills played last year, Tyrod had a quarterback rating above 90 in 10 of those games, per NFL.com. He also broke a QB rating of 100 in half of those games.

Per The Football Database, Taylor was also tied with Alex Smith for lowest interception percentage amongst qualified QBs. Unsurprisingly, Deshone Kizer lead in that category with 4.6%, the man Cleveland just got rid of to make place for Taylor and clear some cap space (FULL LIST).

In 2017, the only other time anyone besides Tyrod Taylor ran the Bills’ offense they threw five interceptions before the first half was over and were benched. The other time they tried to run the offense they tried to throw a hitch route with a one on one matchup against one of the best cornerbacks in the league, and shockingly threw the game-losing/season-ending interception. The Bills would not have made it into the playoffs without Tyrod Taylor.

Fuckin Nate Peterman. That decision to bench Tyrod for him mid-season is the only reason I would need to fire the council of dumbasses known as the Bills’ front office. IDIOTS

Keep in mind, the Bills never gave Tyrod a true #1 receiver. There are zero receivers on the Bills roster right now who can run crisp routes, get separation consistently, and who also don’t have some of the stoniest hands this side of the Mississippi. And all of you saying “But he had Sammy Watkins for a few years!” can shut the fuck up right now. Watkins is hurt all the time, has only (and barely) broken 1,000 yards once in his career, hasn’t broken 600 yards in his last two seasons, and has never caught more than 65 passes in a season.

Tyrod has the arm talent to make every throw in the Browns playbook:

He also has deadly mobility that will probably lead to back-breaking scrambles once defenses start scheming to take Landry and Gordon away.

Getting rid of Kizer was the right move for the Browns too. Kizer is probably going to end up being a bust as evidenced by his at times horrendous play, the balls that frequently sailed high or fell short of an open Gordon, and his 11 touchdowns against 22 picks in 2017. The last time a highly-touted QB had stats that bad his rookie season and still panned out in the long run was Peyton Manning’s rookie season. If you have watched a single Browns game this year I think you know that Kizer will never be Peyton Manning.

In getting rid of Kizer, the Browns added to their already stacked defense by getting defensive back Damarious Randall from the Packers. Randall led the Packers with four interceptions last season, and was the 30th overall pick in the 2015 draft.

Randall hasn’t solidified or even confirmed a CB1 status, but he has shown his fair share of flashes of talent and phenomenal open-field tackling ability. As a former safety, Randall has demonstrated some of his versatility over the past few years by playing at outside corner, slot corner, and free safety for the Packers.

He now teams up in Cleveland with the likes of former first overall pick Myles Garrett, Jamie Collins who can run defend as well as he can play man coverage on some of the NFL’s most elite tight ends, Jason McCourty, and Jabrill Peppers.

Garret, Randall, Collins, McCourty, and Peppers all have the potential to make the Pro Bowl if they have injury-free seasons. During the first nine days of the month of March, the Browns have plugged the roster hole that was their QB slot, added another dynamic wide receiver to start opposite Josh Gordon, got rid of a useless player and cleared cap space in the process, and acquired the Packers’ interception leader from last season to bolster their immensely talented defense. In Jabrill Peppers, the Browns also might have the most versatile player in the league:

The draft hasn’t even happened yet, and the Browns hold two of the top four picks. Mark my words, the Browns will be a force to be reckoned with in 2018. Browns fans, you might just see the first winning season of your lifetime…but maybe this all blows up in a completely Browns-esque fashion, but I doubt it.

If you ever have nothing else to do but look at a brick wall, check out our Sixers video of everyone who didn’t Trust the Process that Embiid and Simmons both liked on Twitter and some of the articles about it that went semi-viral that we got absolutely zero credit for:

this compilation of everyone who didn’t trust the process is amazing pic.twitter.com/1farBrYjTV

10 Reasons Why the Cavs Have a Small but Legitimate Chance at Coming Back and Winning the Final. 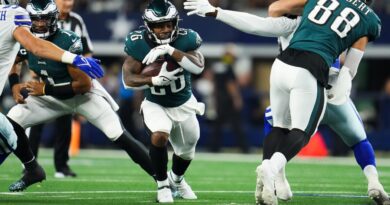