While the inconsistent Carolina Panthers could easily find a way to lose this game, they will probably come out on top. The Panthers are currently 7-3 and second in their division, riding a 3 game winning streak. Meanwhile, the Jets are currently in last in the AFC East, are 4-6, and just suffered a loss. Additionally, the Panthers offense is looking phenomenal as they are coming off a game where Jonathan Stewart put up 110 yards, Christian McCaffrey scored twice, and Cam threw for 4 touchdowns while also rushing for almost 100 yards.

Fuck the Bills. What they did last week to Tyrod Taylor should be considered an unforgivable offense by any football fan. Last week, the Bills benched Tyrod in favor of Nate God damn Peterman who preceded to throw 5 interceptions before the first half was over. Granted, not all of the interceptions were the fault of Peterman, but the fact that the Bills benched Tyrod for a guy who threw more interceptions in one half than Tyrod had all season is fucking mind boggling. Year after year the Bills put Tyrod out there with no pass protection and no receivers (with the exception of when they had Sammy Watkins), and then the narrative somehow always becomes “Is Tyrod Taylor not a starting quarterback? Is he holding this team back?” The fact that this baseless propaganda gets perpetrated by the Bills organization is an absolute travesty.

The magic in Tyrod’s legs and his arm are the ONLY reason the Bills offense has been able to stay afloat the past couple of years. This season he has posted a quarterback rating above 90 in 7 out of the 10 games he has played in, and has posted a quarterback rating above 100 in 4 of those games. All that being said, the Chiefs losing to the at the time 1-8 Giants last week was a fluke, and even if the Bills do the right thing and start Tyrod Taylor this week the Chiefs’ roster has far more talent and depth, the Chiefs have a better coaching staff (as evidenced by the dumb as a rock decision to bench Tyrod), and the Chiefs are a more well run organization top to bottom (again, as evidenced by management’s idiotic belief that the issue with this shit show of a team is the pro bowl quarterback who would start on at least 10 other NFL teams today).

While the Colts are currently in last in the AFC South at 3-7 while the Titans are 6-4 and sit at second in the division, this will be a competitive game. The Colts are a different team with Jacoby Brissett at quarterback, and despite his concussion two weeks ago “all signs point to him suiting up” against the Titans, per the Indianapolis Colts’ twitter. In his limited time in Indy Brissett has shown a remarkably strong arm, decent mobility, and surprising play making ability despite being traded to the Colts mid-season and having to learn their playbook sans an offseason.

Brissett has done well enough to at the very least secure himself a backup gig for next year, and maybe a chance to compete for a starting spot on a team in need of a quarterback. Despite Brissett’s promise, the Titans will likely be the victors in this one because the Colts as a team are absolutely horrendous. The Colts have scored the least points in their division (179), while simultaneously giving up more points than anyone else in their division (280). Usually, I am pretty sure that if your offense sucks and your defense sucks you do not tend to win a lot of games.

Both teams in this one are riding two game winning streaks, and are third and fourth in the NFC South behind the Saints in first and the Panthers in second. The Falcons are undoubtedly the stronger team in this one. The Buccaneers defense will not be able to keep Matt Ryan, Tevin Coleman, Julio Jones, Mohamed Sanu, and possible a non-concussed Devonta Freeman in check long enough to win this game. Not to mention the Buccaneers must still be in a mental tailspin after Jameis Winston’s awkward pre-game speech about “eating a W”.

The seasons for the Bears and the Eagles are about as contrasting as they come as the Eagles look like maybe the best team in the NFL while the Bears could possibly be the worst team in the NFL. The Eagles have done a fantastic job of plugging their roster holes from a season ago. Last year, the Eagles lacked a good pass rush, lacked effective running backs, lacked even remotely decent receivers, and had a horrendous secondary with the lone exception of safety Malcolm Jenkins. Since then, the Eagles drafted and developed a remarkable defensive line, acquired Jay Ajayi and LeGarrette Blount, and added Alshon Jeffery and Torrey Smith. Not to mention, the acquisition of cornerback Ronald Darby and the surprisingly adequate play of Patrick Robinson has solidified virtually the only weak spot that remained on the Eagles roster coming into this season. Not to mention Carson Wentz is playing like an elite quarterback and is currently leading the NFL in passing TDs with 25.

Despite a heartbreaking loss to Atlanta last week, expect Seattle to demolish the woeful 49ers in this contest. The 49ers have only won 1 game all season, and that win came against the Giants who have only won 2 games all season. Additionally, the Niners keep starting C.J. Beat Hard at QB.

Both of these teams have disappointed their respective fan bases this season. Many thought this would be the year this young Raiders team stepped up and became Super Bowl contenders, and many also thought the Broncos would at the very least be competing for a playoff spot at this point in the season. Instead, the Raiders currently own a losing record of 4-6 and the Broncos have lost 6 straight games. However, expect the Broncos to snap that winning streak by beating the Raiders this weekend. The Raiders offensive line has struggled against teams with an elite pass rush thus far into the season. Von Miller and the Broncos defensive line will disrupt the timing and rhythm of the Raiders passing game enough to come out with the upset. Miller is currently tied for 8th in the NFL in sacks with 8.

This will be an exciting game that will end up being a chess match between two of the best head coaches in the NFL today. The turnaround Sean McVay has conducted with the Rams is one of the most remarkable storylines of this season. The Rams went from being one of the worst teams in the NFL last year to being first in their division this year. That being said, the Rams and Jared Goff are somewhat overrated. Goff’s success mainly lies in the fact that he is a young quarterback in a phenomenal offensive system, now has one of the best head coaches in the league, and has tremendous talent around him. Robert Woods taking a screen pass to the house on 3rd and 33 has nothing to do with Jared Goff.

As the season progresses and teams start to accumulate more and more game film on the Rams, it will be more difficult for them to succeed offensively against better defenses, especially in the playoffs. Take their loss last week to the Vikings where they only put up 7 points as an example of what I am talking about here. Expect the Rams to lose their second game in a row to the 8-2 Saints who are riding an 8 game winning streak courtesy of Drew Brees and exceptional play by both of their talented running backs in Mark Ingram and Alvin Kamara. Ingram is currently fourth in the NFL in rushing yards with 806, 15 yards ahead of Todd Gurley. Drew Brees is also the fourth leading passer in the league with 2,783 yards, and currently posts the 3rd best quarterback rating amongst qualified quarterbacks (104.3). This game will likely be a shootout but expect the Saints to eventually come out on top.

Now that Carson Palmer is unlikely to return from injury this season—per Cardinals reporter Darren Urban‏—Arizona fans should pack in their gear and wait for next year. If anyone out there really thinks that Blaine Gabbert has any chance of winning this game against the Jaguars secondary you can go ahead and throw your brain in the oven. Make sure to preheat that shit to 425.

Without Aaron Rodgers, this game is a wrap. The Steelers are coming off a game where they put up 40 points and absolutely torched the Titans while the Packers are coming off a game where they didn’t score a single point and got blown out by the Ravens. The Steelers offense is as stacked as it has ever been. Big Ben is 8th in the NFL in passing yards, Antonio Brown leads the league in receiving yards with 1,026 while no one else has even broken 1,000, and Le’Veon Bell currently leads the NFL in rushing with 886 yards.

The Browns are fucking 0-10. They might pass the ’08 Lions for the worst season in NFL history. If you have anyone on the Bengals in fantasy start them this weekend, and if you are a Bengals fan then don’t even bother watching this game because your team is definitely going to win unless the Bengals facility gets nuked in the next couple of days. If you are a football fan in general, you might not want to bother watching this game either because it will be a snooze fest between a shit team and an utterly disappointing team.

With Deshaun Watson out for the year, this Texans team is done. Last week, they were barely able to squeak past the 4-6 Cardinals lead by Blaine Gabbert. Meanwhile, the Ravens last week blew out the Packers 23-0. The talent on the Texans roster will keep the game competitive as Clowney, Watt, Lamar Miller, and DeAndre Hopkins will make some plays but the Ravens will untimately come out on top because they currently have the better team, a better quarterback, and currently have more to play for than the Texans and thus far more motivation.

The Patriots Aren’t Giving up on Josh Gordon Just Yet 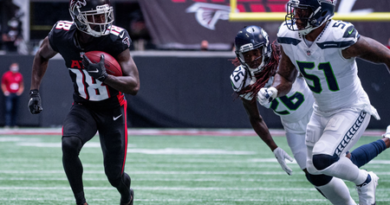