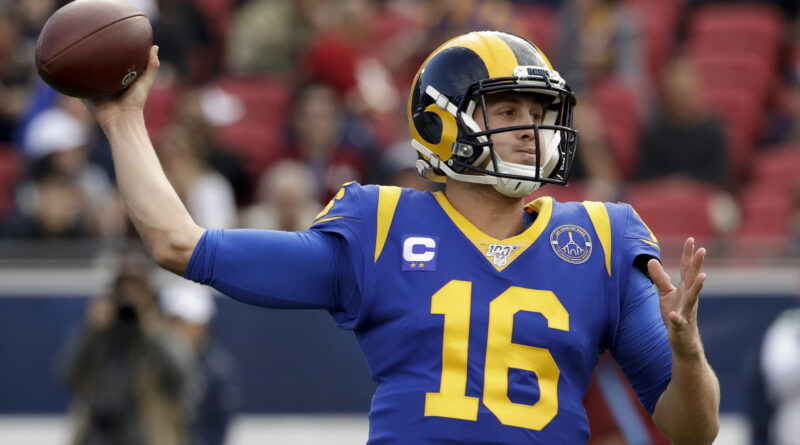 Don’t get me wrong, the Rams actually do have promise on their roster and there will definitely be brighter days ahead for Los Angeles. The Rams have a stellar defensive line consisting of the likes of Connor Barwin, Robert Quinn, Michael Brockers, and the man who is probably tied with JJ Watt for most disruptive player in the entire league, Aaron Donald. Offensively, they have Tavon Austin and Todd Gurley.

While it is already apparent that Tavon Austin will probably never be a true #1 receiver who makes consistent contested catches in traffic and runs crisp routes, he is still a phenomenal athlete and an offensive weapon if used correctly. Gurley had a horrendous year last year, but his offensive line was also nothing short of terrible, Case Keenum hit the open linebacker every other offensive possession, and he had this fucking guy as his coach: 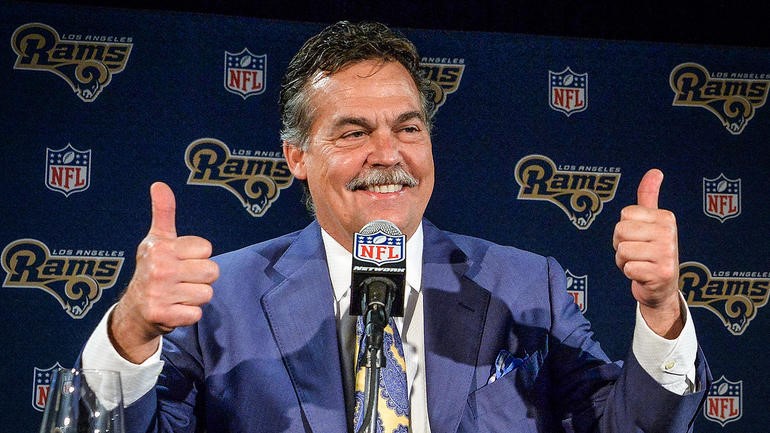 (Spoiler alert: this fucking guy has literally lost more games than any other coach in NFL history, except for one coach who managed to lose exactly as many games as Fisher lost)

Gurley still has a rare combination of size, speed, strength, and athleticism that maybe only three other running backs in the league have (David Johnson, Le’Veon Bell, and Ezekiel Elliot). He will bounce back from last year eventually. Despite the aforementioned talent on their roster, the Rams unfortunately traded up in the draft last year to take a quarterback number one overall who is destined to be a bum. If anyone reading this has seen even two episodes of Hard Knocks with the Rams, you already agree with this sentiment.

A bum (in football terms), according to Webster Dictionary, is defined as “any player that come into the league with a lot of hype and for whatever reason either pisses their talent away or flame out.” Johnny Manziel? Bum. JaMarcus Russell? Bum. Josh Gordon? Bum (but the NFL’s marijuana policy does blow). Vince Young? Bum. Jared Goff? Future bum guaranteed.

Evidence for Goff’s bummish ways can be found by analyzing his misleading senior year at Cal, analyzing his first year in the NFL, and indeed, by watching him on Hard Knocks. During Jared Goff’s senior year at Cal, Goff threw for 4,700 yards, a 65% completion percentage, and threw for 43 scores to only 13 interceptions. Stellar numbers for a stellar number one overall pick right? Nope. First off, 19 of those 43 touchdowns he threw came in the last 4 games of the season, accounting for 44% of his touchdowns for that year, and 17 of those 19 touchdowns came in 3 games out of the last four games against bad teams, accounting for 40% of his total touchdowns.

Basically, Goff threw nearly half of his total touchdowns for the year during 3 of his last 4 games against teams that were not very good. In his 10th game of the year, Goff threw 6 touchdowns against Oregon State. Oregon State won 2 games that year. In his 12th game of the year, Goff threw 5 touchdowns against Arizona State. During that season, Arizona State had a 6-7 record and was unranked. In his final game of his college career, Goff threw 6 more touchdowns against the Air Force Academy. As most college football fans know, the Air Force Academy is usually subpar and has never even been in contention for one of the major bowl games, let alone the national championship. The year Goff threw 6 TDs against them wasn’t much different. That year Air Force did have a winning record, but they did not beat a single ranked team, only played one ranked team the entire season, and had 6 losses to complement their 8 wins and were unranked.

Aside from his misleading stats, another red flag about Goff was the fact that he had the worst career college record of any number one pick of all time. Jared Goff was 14-23 (.378) in his college career. This career record is especially concerning when one looks closer at his senior year. During Goff’s senior year at Cal, the only remotely good schools he beat were Texas and Washington, and he barely beat them. Cal beat Texas by 1 point, and they beat Washington by only 6 points. 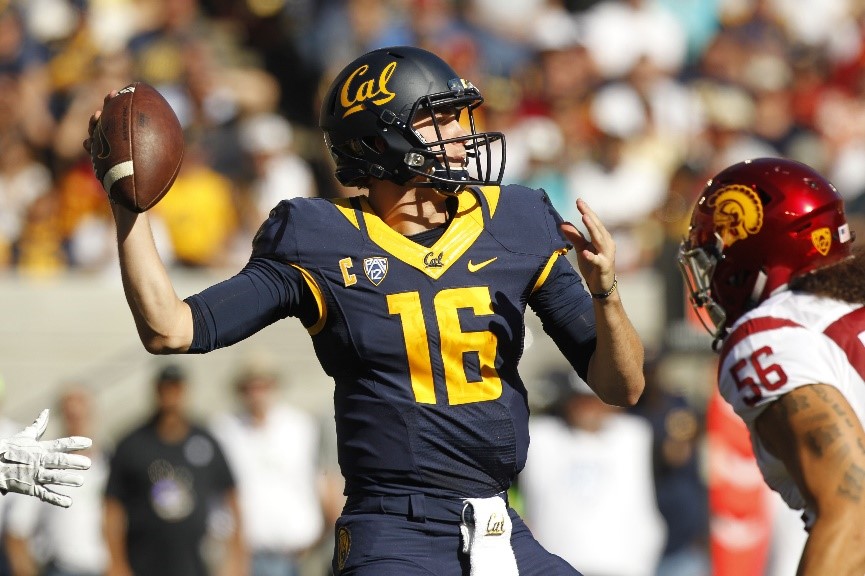 Goff struggled against good schools his senior year. During that year, Cal lost to UCLA, USC, Stanford, and Oregon. The loss to Oregon is especially concerning. While Oregon is not the football power house it once was under Chip Kelly (apologies for using Chip Kelly and “power house” in the same sentence), Oregon still has a reputation for recruiting exception athletes with great speed because that is indeed part of Oregon’s recruiting strategy. Playing against the fast players on Oregon’s defense is the closest Goff got that year to playing an NFL-like defense. This is because with Oregon’s speedy defense their defenders can close on plays more quickly, making passing windows smaller, much like how passing windows are smaller in the NFL. Against Oregon, Goff threw 41 passes and only completed 18 of them for an abysmal 43% completion percentage. Granted, Goff also threw 2 touchdowns, but the 43% completion and the interception he threw to go along with it ensured Oregon took home the win.

After his misleadingly good senior year at Cal, Goff shat the field in the NFL. Once again though, I would like to remind everyone that year his offensive line was nothing short of terrible, and he had this fucking guy as his coach (who has lost 165 games in his career, tying Dan Reeves for most losses EVER by an NFL coach): 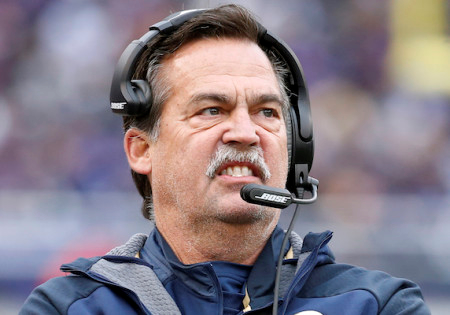 That being said, Goff looked appallingly awful in the games he played. He was indecisive, unconfident, and turnover prone. Those 3 qualities will run any quarterback out of the NFL eventually, let alone a bum-in-training like Goff. During his first NFL season, Goff threw 5 touchdowns and 7 picks, fumbled 5 times, and completed only 54% of his passes for a 63.6 quarterback rating. So for every touchdown Goff threw, he turned the ball over 2.4 times. Fantastic. Additionally, 3 of his 5 touchdowns came in one game, and Goff lost all 7 games he played in (all of which he started). The man still has yet to get even one win in the NFL.

The final piece of evidence for Goff’s future as an NFL bum is everything that he said and did throughout Hard Knocks. Throughout the series, Goff struck the viewer as lazy, unengaged, and yes, douchey. It seemed like every time a coach attempted to talk to Goff about something, he appeared to just say yes and agree with everything coaches said just to get them to stop talking as soon as possible. He flat out does not want to learn. Goff never once asked a question about any plays, techniques, or concepts.

In addition to his teammates lack of confidence about him, Goff also performed horrendously in preseason and had several cringe-worthy plays. In fact, the second pass Goff ever threw in preseason was a 7 yard duck that was easily intercepted by a linebacker. In the second game, he was standing in the pocket and simply tripped over his own feet, fell onto the ball which caused a fumble, and then got easily shoved out of the pile when there was a fight for it. Finally, his very first pass of the third preseason game should have been a pick 6 but the defender dropped it. Basically, Goff is a shitty, douche, and lazy quarterback who will never take a team to the playoffs, and will probably be out of the league in 4 years. All the Rams did was trade up to fuck themselves. Hopefully with Jeff Fisher gone, the Rams correct their mistake as soon as possible, release Goff, and start using the few offensive weapons they have effectively. 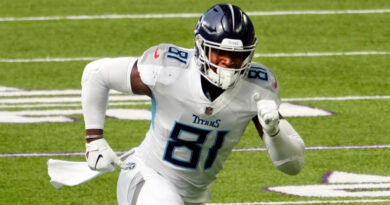 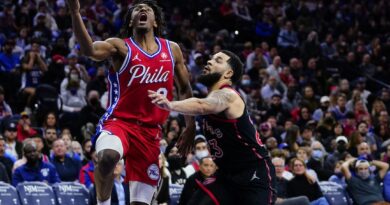 Sixers Will Go As Far As Tyrese Maxey Takes Them