With the recent stunning release of Chiefs receiver Jeremy Maclin, many Eagles fans have been clamoring for a reunion between Maclin and the Eagles. Sorry to be the bearer of bad news fellow Philly fans, but a reunion right now would not work for the Eagles. Jeremy Maclin is going into his ninth NFL season right now. At best, he has two years of his prime left, and honestly I think he is past his prime. Last season he played in 12 games, posted 500 yards receiving, and only two touchdowns. Granted, he is playing an a Chiefs offense that does not favor wide receivers, but his speed and route running looked like they dropped off last season after his previous 1,000 yard campaign in 2016. At this point in his career, Maclin’s talent level is comparable to Jordan Matthews and Torrey Smith, and below Alshon Jeffery’s. Jordan Matthews has proved to be an at least dependable receiver, Torrey Smith—while he has not looked great lately—is only going into his seventh season and played with one of the worst organizations in the NFL in the 49ers the past few seasons, and Alshon Jeffery is currently in the prime of his career and is a WR1 on almost any team in the NFL.

Best case scenario, I see Maclin beating out Torrey Smith for the third receiver slot, but only barely. Then, the Eagles have a problem because you cannot have a team where you are paying your fourth wide receiver (Torrey Smith if Maclin were to beat him out for the WR3 slot) 15 million dollars to sit on the bench. A team constructed that way will inevitably be weaker at another position as a result of the salary cap teams must adhere to. So then, the Eagles are left with the choice of benching their 15 million dollar receiver or playing games with frequent four wide receiver sets, which would make absolutely no sense. A team that runs four wide receivers sets consistently cannot win the Super Bowl, an offense structured around four wide receivers will become too predictable over time. Additionally, the Eagles did not bring in LeGarrette Blount, a renowned power back coming of the best season of his career, to play four wide receiver sets the entire game. It would not make sense for the Eagles to sign Maclin on any level, but fear not Eagles fans, your receiving core is worlds away from where it was last year. The signing of Alshon Jeffrey and Torrey Smith, and the fact that the Eagles drafted two underrated wide receivers in April both ensure that Nelson Agholor and Dorial Green-Beckham will NOT be suiting up as your second and third receivers this year. Torrey Smith, Alshon Jeffrey, and Jordan Matthews all have better hands, route running ability, game effort, and awareness than Agholor or Green-Beckham. This Eagles season with Wentz at the helm of a new and improved offense to match with a new and improved defense could be an entertaining one to watch. 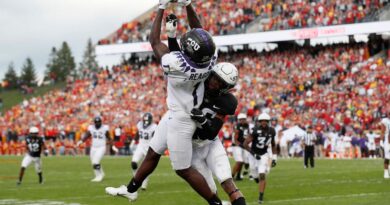